This year, we had two presentations about our local wildlife residents. Janet Fenton, who does outreach forthe Sandy Pines Wildlife Centre in Napanee and Taras Wylynko, our local turtle expert who is a cottager on Buck Lake informed and entertained both the kids and the adults who attended. 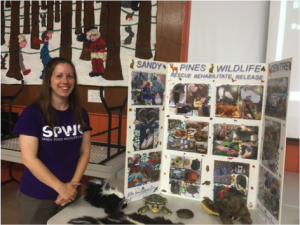 Janet shared her interesting tales of wildlife that has been rescued over the years and reminded us of how to protect the animals we may encounter around the lake.

Last year 4272 animals were rescued and received care at the Sandy Pines. 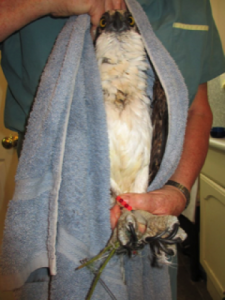 This osprey was found in the water unable to get out because it was entangled in fishing line. Don’t forget to clean up after yourself. At the wildlife centre they have seen mergansers, swans, gulls, raccoons, foxes, turtles and hawks all wrapped up with fishing line or have ingested the hooks and have had to have the hook surgically removed.

It is so very important to leave our wildlife animals in the wild. It is also illegal to keep wildlife as pets. Every year at Sandy Pines they see animals come in sick from not being given the proper care. Also with so many animals disappearing from the wild we need them to stay in the wild. 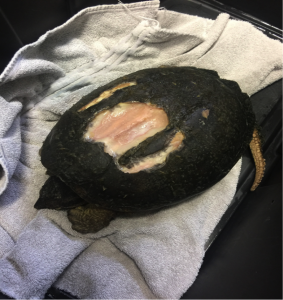 Janet provided tips on what to do if encountering a bird or animal that may require assistance.  People think driving over a turtle would be ok but many times snapping turtles get startled and scared and snap at the vehicles and break their jaws or the car still hits the top of the shell.

“To preserve and enhance the health of Buck Lake and its watershed for generations to come”(Buck Lake Plan, 2012) 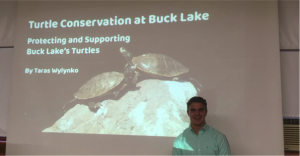 Taking his inspiration from the Buck Lake Plan, Taras, an avid Buck Laker and recent high school graduate heading to Queen’s in the fall, gave us a presentation on the turtles found around Buck Lake.  He has been documenting and researching turtles at the lake for the past several years and provided new insight into their needs and habits. Plus, his videos of the turtles were fascinating.

Quick Facts about the turtles…