The following notes represent a small bit of Buck Lake history. I have had the privilege of learning these facts from John and Debbie MacComish. During a couple of interviews John and Debbie generously shared some of their family history and their remembrances from the Buck Lake area.

George MacComish (John’s grandfather) came to this area from Scotland in the late 1800’s. He was one of ten children in his family. Wallace MacComish (John’s father) was born in Frontenac Provincial Park in 1900. The parkland was private property then and George owned some. Wallace married Mable Green. The Green family was from United States. It was Mable’s father John who designed the still famous Johnny Green Lure. In 1907 John’s Uncle Alfred was born on the 200 acre property which John and Debbie now own. He was born in the woods back by the lake in the Stoness Mica Mining Camp.

John himself was born on Devil Lake in a still existing log house on the Stethem property in 1938. Debbie (Wilson) was born in Perth Road Village in 1952 and her parents were also from this area. They married in 1970 and still live at 7 MacComish Lane.

So back in the day John’s generation was the first to have cars. John’s father and grandfather never owned a car. There were two generations of families who lived in this area without vehicles. They used horses for chores on the land and the frozen lake. Perth Road was a one-lane dirt road. If you needed groceries from the store you left a list in your mailbox and the groceries were delivered by the postman who also happened to own one of the general stores. There were two general stores in the village at that time. You could buy flour, sugar and tea (there was no coffee). The mailman also delivered feed for the pigs and cows (ground oats). It cost ten cents for the delivery. The supplies came to the stores by train on the now Cataraqui Trail. There was also a cheese factory in town. It was the last house in town below the road by the Trail. John remembers it was for sale in the early 60’s for two thousand dollars.

No one had any money and everything was GREEN. There was no garbage. The chickens and pigs ate all the kitchen scraps and every jar was used over and over for preserves. If you didn’t grow it in the summer or fish or hunt you would not have food. Life revolved around preparing for the next season. Every family had a barrel of pork, herring and trout all salted for winter. Debbie remembers old customs and remedies. The wood stove had blackstrap molasses, coal oil and sulphur warming. Mother’s mixed a teaspoon of each together and the children and adults had a spoonful every morning for their tonic. Goose fat and camphor were mixed for colds and rubbed on your chest. They put onions on the bottoms of their feet for fever and cough medicine was a mixture of lemon, honey and onion. Every day the lanterns on the coal oil lamps had to be cleaned with newspapers for the next night. Debbie remembers how difficult it was to cut the wick just right or the lantern would smoke. The families did not buy very much. The bush was full of wild leeks, parsnips, turnips and many healing herbs. Cranberries grew naturally in the swamps. The local bamagillia (aka balsam poplar) tree nuts are known to be a tonic for cancer and the yellow blossoms of the goldenrod plant cured infection.

During John’s father’s time there was no electricity, so no refrigeration. Everyone had an icehouse at their home or cottage even on the islands. So the winter work was cutting ice. The ice cakes were 16 by 16 inches and it was $35 for 400 cakes. This was the only refrigeration. During the winter the icehouses were all filled and the ice covered with sawdust to prepare for warm weather. The sawdust of course was a by-product of logging and cutting wood for the wood stoves. They had a sleigh with a saw blade, which did run from a motor, and they would cut a square of ice the size of a house then cut the ice cakes from it. When they were finished they would surround the area with cedar branches to warn other people of the open water.

As recently as the 1940’s, families were still able to make a living from the lake. During the summer 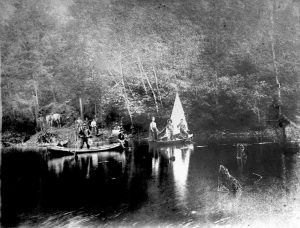 months it was fishing and the winter was cutting ice. When it was fishing season the men “guided” mostly American cottage families for trout fishing. This actually meant that they ROWED boats while the cottagers fished. The fishing was mostly for lake trout and the limit was 10 fish per person per day. John remembers everyone taking their whole limit (husband and wife) that is 20 trout every day and the smallest would be around 8 pounds. Apparently the pan fish were so plentiful they were taken from the lake by the bagful. They used steel lines and Johnny Green Spoons for the trout. Most of the boats were hand made. John Green built his own boats and carved his oars. The men cut cedar trees into 14 and 16 foot lengths and split the whole length of the log right down the middle. Then they planed the log to the desired thickness and constructed boats. The cottagers did not own boats or motors. The fishing season was closed at spawning but you could fish all year. John remembers Pike over 20 pounds. He told a story of one year that the eels were bad in the lake. The dead pike were floating everywhere. The eels would spawn by standing on their head. Then you could spear them and they would twist around the spear. They cooked the eel on a rack in the oven to eat and used the skins for arthritis and steering wheel covers on tractors and cars. The famous Vanderbilt family owns an island on Devil Lake and when John was 16 he guided for them every summer day for two years. So every local family at the end of summer would have a barrel of smoked fish, salted fish and canned fish for the winter. The moms would bake and sell bread and pies to the cottagers.

With respect to hunting – people only shot what they needed for food or hides. The protein portion of their diet came from venison, rabbit, partridge, squirrel, fish, and home raised cows or pigs. Trappers were able to catch muskrat, beaver, otter, mink, weasel, coon, skunk, fox, coyote and wolves. The pelts were sold to buyers who came around on the one lane dirt roads. John remembers when Ken Green shot a wolf in the area and it weighed 96 pounds. As long as John can remember Buck Lake was always controlled by a dam. He remembers that the lake never froze solid in the Narrows or around Pulpit Island. They were never able to take horses onto that area of the lake for logging or hauling ice.
Mica was heavily mined in the area but most was finished by 1910. Apparently the Mica slabs were the size of washtubs.

Most hardwood Logging in the area came out of Hardwood Bay on Devil Lake.

In 1958 John worked on the crew that installed the culvert across our lake. There was a bridge at that location previously. The culvert was delivered in sections and after they took the bridge out they assembled the culvert and pushed it into the lake with a bulldozer. John remembers that the big pipe took a long time to fill with water and sink. After that they constructed the road over the pipe.
The parking area across the road from Pine Haven used to have a school built on it. It was Pine Grove School and later became a store, which burnt down. Most of the old buildings in fact had a fire at one time or another.

John and Debbie remember the trout spawning at night on the shoals. The herring and trout made so much noise jumping that you could hear the splashing out in front of the Greens. In their memories Christmas Bay was called Billy Green Bay and what we know, as Hidden Valley was Roberts Bay. The oldest families on the lake were Roushorns, Sears, Greens, Fettigens, Varleys, Leggitts, MacComish, and Munns. There were many families from United States on the lake even long ago.

For John and Debbie this lake has provided a home and livelihood and great adventures. It is a place full of beauty and awe. They have raised two sons and have six grandchildren all of whom love the land and the lake and participate in all the activities it provides.

I would like to thank them for sharing their stories with me. It was a lot of fun and I learned a tremendous amount about this area. John and Debbie are heartwarming and generous people.