The Buck Lake community can be justifiably proud of many aspects of living in our little piece of paradise in South Frontenac Township. One such aspect was the Boatilla that sent physically disabled children to Camp Merrywood, a specially equipped summer camp on the Big Rideau operated by Easter Seals. There these ‘Sent to Camp’ kids get to enjoy for ten days what we Buck Lakers enjoy throughout the whole summer or, some of us, year-round.

Ironically, the Buck Lake Boatilla traces its origins back to an outbreak of petty crime in the 1990s. In response to a rash of break-ins, theft of gas tanks from boats, and the like, some ‘take charge’ members of the community formed a Neighbourhood Watch and recruited others to conduct regular patrols and keep their eyes open for trouble. The crimes stopped when the “Usual Suspects” left Buck Lake. It was not long before the organizers, Rick, Ron, Boyd, Steve, and Roscoe, decided the Watch was no longer necessary. Rather than disbanding, they cast around for another useful purpose for the organization. They decided on supporting Easter Seals’ Camp Merrywood and created the slogan “Send a Kid to Camp”. That was in 2005, the start of the Buck Lake Boatilla.

That first year was both hilarious and a bit scary. It was before the Boatilla Committee got the idea and Randy Ruttan and his campers agreed to have the participating boaters and others assemble for a barbecue at the Hidden Valley campground at the end of the parade of boats. The plan on that first day was for the boats to assemble at the culvert, parade around Pulpit and Buck Islands, and re-assemble in a sort of ‘floatilla’ in Christmas Bay. There was no advance canvas for funds; instead the suggestion was that people would donate $5.00 for every person on their boat, the collection being done by Ross Trudel being driven from boat to boat. It was a great plan, but it didn’t allow for the strong wind and high waves that day that made the ‘floatilla’ part impossible and produced any number of near dunkings as Roscoe precariously attempted to do his collections without ramming anybody. It was quite a show, but a successful one that raised $3,750, enough to send nearly two kids to Camp Merrywood; the goal had been funding enough for one. In those days it cost $2,000 per child; more recently the cost has increased to $2,500.

The high cost is due to the need for a very high staff to camper ratio combined with the Camp’s having comprehensive health care services on site to keep the children safe and also with the specialized equipment needed for them to overcome the limits of their physical disabilities.

Each year since 2005, the Boatilla has grown both as a charitable and a community event. Thanks to Randy Ruttan and the campers, many of whom participate actively, that first frustrated ‘flotilla’ in Christmas Bay was replaced shortly thereafter by a community barbecue at the Hidden Valley campground. The campers, largely from the United States, are not only generous contributors to Camp Merrywood, they share their space with the Boatilla participants, and some do the cooking as well as sharing in the fun. 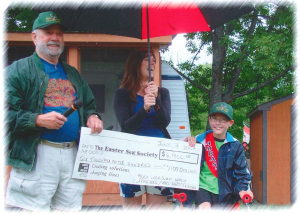 Another great innovation adopted early on was to invite past and potential campers to the barbecue and, more recently, for Buck Lakers with big pontoon boats to provide them with rides in the Boatilla itself. Sometimes it has been quite a challenge to get those big battery-powered wheelchairs safely maneuvered onto the decks of pontoon boats but the resulting delighted smiles on the faces of the children and their parents have been well worth the effort.

Another more recent innovation has been live music at the wind-up BBQ. This has been provided by Kaz’ band, a father associated with the Kingston Symphony Orchestra and his two daughters. A feature number in the last two years has been an original song written and sung by Kiera, a Merrywood camper, who has come with her parents several times to the Boatilla. Another speaks well for the future. About four years ago, some children from Hidden Valley spontaneously showed up with a little plastic cash register and put on a bake sale, all proceeds (over $300) going to the Boatilla. It was a surprise to everyone except, of course, their parents who no doubt furnished encouragement, cooking skills, and the baked goods’ ingredients. In the same spirit of giving, other children on Buck Lake have put on a book sale and offered lemonade from a dock in the narrows with the proceeds earmarked for various causes, including cancer research.

The Boatilla’s contributions to the Buck Lake community are hard to measure. It certainly contributes substantially to our community’s pride, its identity, and to the pleasure its seasonal and full-time members derive from their participation in it. Its contribution to Easter Seals is relatively easily measured in terms of the money raised for Camp Merrywood. Its contribution to physically challenged children is partially counted by the number of kids sent to camp. Getting measures of what going to camp means to those children, their enjoyment, development, self- assurance, and the respite provided to their parents is significant but not easily measured. The measurable results, so far shown in the cart below. 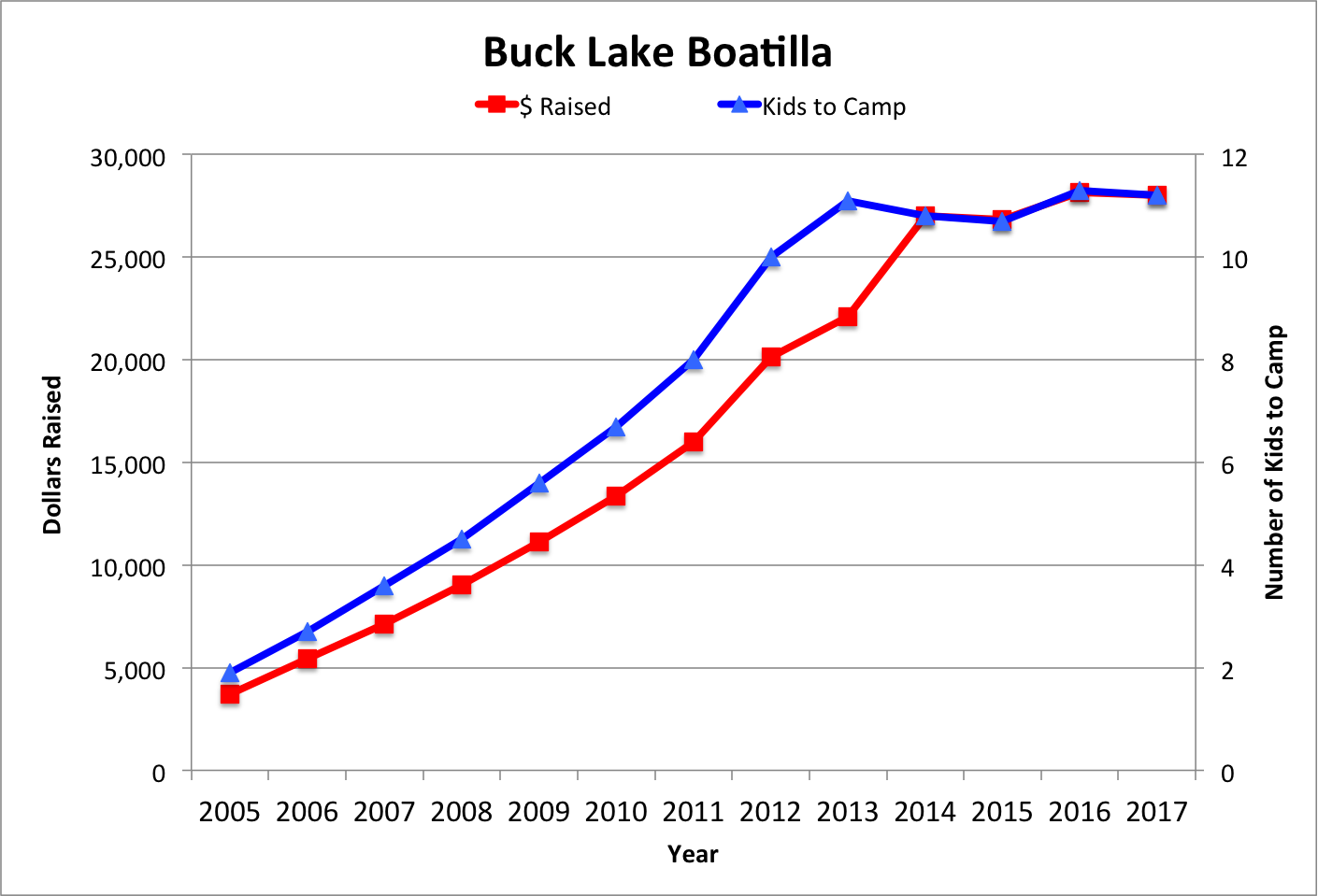 Apart from the first year and the 10th Anniversary when it sought to “Send Ten in Ten”, the Boatilla has never set a fund-raising target. The first principle has been that each donation depends entirely on each donor’s prosperity, whether his or her donation is easily accommodated or difficult. All donations matter and are welcome, small and large; it’s the spirit that counts. The second principle is that 100% of the donations go to Easter Seals and Camp Merrywood; the Boatilla incurs no administrative costs.
The 2017 Boatilla will be the 13th annual. Cumulatively (including the anticipated donations this year) our community, through the Buck Lake Boatilla, will have raised over $200,000 over its 13 years, enough money to send to camp around 100 kids who would not otherwise have been able to have this great experience. That’s something of which to be really proud!